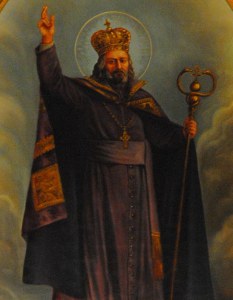 When we were in Rome for the first time, after coming back to full communion in the Catholic Church, we entered St. Peter's early in the morning, having been told we could attend Mass there at one of the side altars. Because we were not familiar with the Italian language, we were instructed to stand by the sacristy as the priests came out, and ask if someone was offering the Mass in English. We found a priest from Spain who told us he would, so we followed him. Father led us around to the other side of the Basilica. When we arrived at his assigned altar, another priest was just finishing Mass. We waited. To our great delight and surprise, we were standing before the altar of St. Basil, where the body of St. Josaphat was buried. This was not a coincident in our journey but truly a sign from Our Lord. While working on our constitutions, each of us felt drawn to the service of Unity, having spent so many years, apart from the Church. God was giving us a sign to continue along that quest, and we have since include St. Josaphat in our constitutions. This was our first Mass at St. Peter's in Rome.

Born in 1584, son of Gabriel Kuncevic, in Vladimir, a village of the Lithuanian Province of Volhynia, St. Josaphat was baptized John. His parents were Christians of the Greco-Slavic rite, in use among the Russians but were then separated from Rome. When John was just a child, his mother explained the icons in church and in his tender heart formed the first longings for virtue. Years later he told a friend that he felt a spark of fire leave the wounded side of the Crucified and enter his own heart. This event filled him with joy and gave him the desire to suffer poverty and die someday for his Savior. John's father sent him to Vilno in Lithuania to learn more about the family business. Nevertheless, he spent much of his leisure in reading the lives of the Saints, and praying the Divine Office, which he memorized. He was much disturbed by the religious divisions in the local church. The Ruthenian Church was divided into two contending parties, those who followed the Byzantine Church and those who persevered in schism. The question of reunion with Rome was a hotly debated topic.

The Union of Brest

The bishops of the Ukrainian and Byelorussian Churches who lived within the Polish-Lithuanian Commonwealth held a Ruthenian Synod in 1595 and voted to unite with Rome under Pope Clement VIII. John Kuncevic was fifteen years old. In 1598 seven bishops signed the Union of Brest, which allowed them to retain their Eastern Rites while in full communion with the Pope. Although most of Vilno refused union, John made his profession of faith, then entered the Basilian Monastery of the Holy Trinity in Vilno, and took the name of Josaphat.

Unable to find adequate spiritual direction among the lax priests of his Order, Josaphat compensated by penance and sacrifices of reparation for them and for those who had refused communion with Rome. Finally spiritual guidance came in the person of John Rutsky, a convert from Calvinism and later Bishop of Kiev. In 1609 Josaphat was ordained a priest and began his career of preaching and spiritual direction and providing for the needy and homeless. Over sixty men entered the Basilian Order under his influence. Josaphat was made the superior of a daughter monastery at Byten, where he revived devotion to the Mother of God at Zirovica. Returning to Vilno as archimandrite of the monastery, he began to reform the monks. There he also compiled texts from the Eastern Fathers and Doctors under the title "A Defense of Church Unity." All these activities led to his being appointed Coadjutor Bishop to the elderly, ailing Bishop of Plock (Plotsk). Subsequently Josaphat became the Bishop of Plock with the title of Archeparch (Archbishop).

Called to Revitalize His Diocese 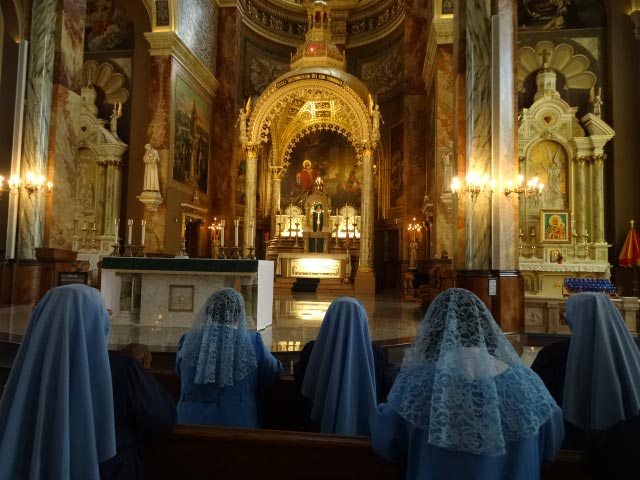 The new appointee at once called a synod to revitalize his diocese. He detached his priests from subservience to the unruly nobility and wrote "A Rule for Priests." Most of all he pursued the reunion of all with Rome. The major obstacle was the Orthodox Bishop Meletius Smotrytsky, who was aided by schismatic preachers sent from Constantinople to prevent reunion. The latter spread slanders against Josaphat and, during his absence in Warsaw to plead for reunion, sought his removal from Plock. Hostility increased when he wrote to prove that St. Vladimir, had actually preached the Catholic, not Orthodox faith. While Josaphat was visiting Vitebsk (Belarus), he was cruelly hacked to death on November 12, 1623. He was about forty-five years old. Josaphat had said before his martyrdom, "I rejoice to offer my life for my holy Catholic faith." He had prayed, "Grant that I be found worthy, Lord, to shed my blood for the union and obedience to the Apostolic See." He had never revoked his childhood experience of the Crucified.

It has been written that the blood of the martyrs is the seed of Church growth. Among the many miracles consequent to Josaphat's murder was the conversion of those assassins to union with Roman. Thousands returned to the Catholic faith. In May 1643, twenty years later, Pope Urban VIII declared him "Blessed." But it was not until June 29, 1867, that Pope Pius IX canonized him "Saint." On November 12, 1923, 100 years after his martyrdom, Pope Pius XI declared him the heavenly Patron of Reunion between Orthodox and Catholics. During the Second Vatican Council, at the express wish of Pope John XXIII, who himself was most interested in reunion, the body of St. Josaphat was finally laid to rest at the magnificent altar of St. Basil in St. Peter's Basilica. This took place on November 25, 1963.